U.S. Department of Agriculture Secretary Sonny Perdue announced the second tranche of Market Facilitation Program payments will begin the week before Thanksgiving. Farmers with eligible commodities will receive 25% of the total payment expected in addition to the 50% already received. Perdue was meeting with farm broadcasters at the National Association of Farm Broadcasting convention today in Kansas City as the news was released. Hear from Perdue in this video and read more.
https://northarvestbean.org/wp-content/uploads/2019/06/Sonny-Perdue.jpg 283 300 Red River Farm Network https://northarvestbean.org/wp-content/uploads/northarvest-bean-logo.png Red River Farm Network2019-11-15 14:29:212019-11-22 10:07:58Second Tranche of MFP Payments to Begin Next Week

USDA has outlined how the rates were made for the new round of Market Facilitation Program payments. There is a countywide rate, but that was based on the estimated trade-related damages for various commodities. For dry edible beans, the commodity rate was at $8.22 per hundredweight. Soybeans were $2.05 per bushel, corn was at 14 cents and wheat was at 41 cents. Hogs and dairy rates were also announced, with hogs at $11 per head and milk production at 20 cents per hundredweight. 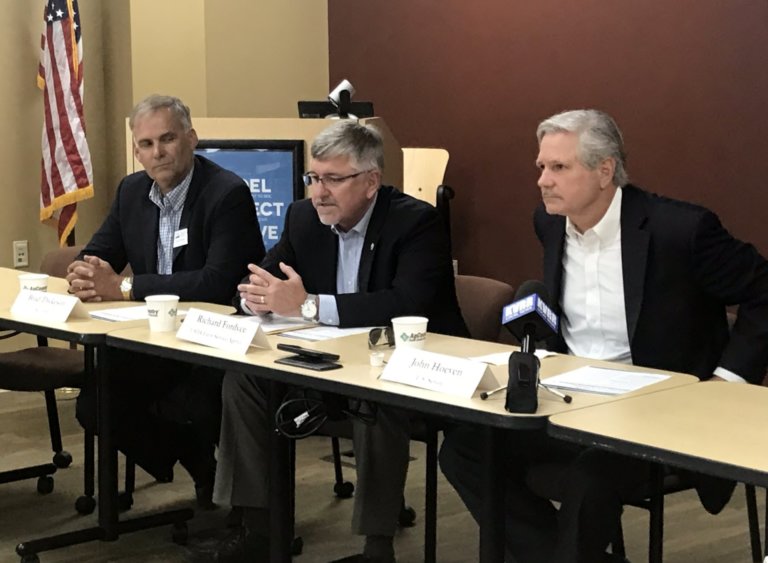 USDA Farm Service Agency Administrator Richard Fordyce paid a visit to North Dakota, meeting with farmers, agriculture organizations and other state leaders. The trip was prompted by North Dakota Senator John Hoeven to discuss details of the new Market Facilitation Program payments. This was the first roundtable event for the Administrator with farmers regarding the payments.
Farmers are still curious as to how the county rates were determined. Fordyce said in order to get payments out sooner rather than later, USDA had to come up with a calculation that didn’t require taking a crop to harvest. “It’s based on acres of crops that were planted in that county, the average yields of those crops times a number by commodity,” said Fordyce. “For example, if there was a county that experienced a weather anomaly within the last three years, that would impact the county yield number.”
Hear more and read more about Fordyce’s visit.
https://northarvestbean.org/wp-content/uploads/2019/08/richard_fordyce_in-ND-768x563.jpg 563 768 Red River Farm Network https://northarvestbean.org/wp-content/uploads/northarvest-bean-logo.png Red River Farm Network2019-08-06 15:50:582019-08-06 15:50:58FSA Administrator Visits ND to Discuss MFP Payments
Signup for the new round of USDA Market Facilitation Program payments begins Monday, July 29 and continues through December 6. The first payments will be made in early August. Farmers who produce alfalfa, barley, canola, corn, dry beans, oats, soybeans, sunflowers and wheat are eligible. The per-acre payments are based on a single county rate. MFP payments are limited to $250,000 per person or legal entity and no applicant can receive more than $500,000.
To view the county rates and learn more, click here.
https://northarvestbean.org/wp-content/uploads/northarvest-bean-logo.png 0 0 Red River Farm Network https://northarvestbean.org/wp-content/uploads/northarvest-bean-logo.png Red River Farm Network2019-07-26 08:57:162019-07-26 14:58:39New Market Facilitation Program Details Released

USDA Deputy Secretary of Agriculture Stephen Censky came back to his home state of Minnesota and met with state farm leaders on Tuesday. States like Minnesota and North Dakota, which are more dependent on exports, will see that reflected in the new Market Facilitation Program payments.

“It is based on the calculated impacts on trade per commodity.” says Censky. “That is totaled up together with all the commodities within a county, including how much is produced in each county, and that will determine the county rate. So yes, there will be differences between counties.” The country rate structure has not been announced and that may not happen until after the Farm Service Agency certifies acreage in mid-July. “Our goal is have it available right around or shortly after the USDA acreage report.”

While few details are still available, the proposal for USDA’s latest round of Market Facilitation Program payments is currently under review by the Office of Management and Budget. Speaking to reporters in Washington D.C. on Wednesday, Agriculture Secretary Sonny Perdue said the trade assistance will go out to farmers as quickly as possible.

“It more than likely won’t be completed in the next two months, but we’re going to move as quickly as we can. We are not revealing details at this point in time.” One reporter asked if the $16 billion would make farmers whole. Perdue said “the purpose is to make them where they’re able to pay their obligations and be able to produce again the following year.”

The details of the new Market Facilitation Program will be released within a matter of days. “I believe people deserve an answer sooner rather than later,” said Agriculture Secretary Sonny Perdue. Perdue emphasized the goals of the MFP payments differ from prevented plant coverage. “The Market Facilitation Program is designed for tariff disruptions and we have a safety net in insurance over prevented plant.”

The USDA legal team has determined crops must be planted to be eligible for MFP payments. With the new trade assistance plan, farmers will receive payments based on a county rate and their eligible planted acres in 2019. The formula for the county rates has not been announced, but will be based on the trade impact for the crops grown in the county.

U.S. dry bean growers and producers feeling the impact of ongoing global trade disruptions will soon feel relief with USDA’s announcement of a new assistance package. Dry beans are included in a list of over 20 crops that will receive a payment through USDA’s Market Facilitation Program for 2019.

“While we remain hopeful that we can soon reach deals to resume trade flows, we are very grateful for this support from the administration through the U.S. Department of Agriculture (USDA) to help our industry stay productive during this challenging time,” says U.S. Dry Bean Council President Deon Maasjo of Oakes, North Dakota. “Our public/private partnership with USDA remains strong and we remain committed to working through this together,”

The new round of trade-related assistance totals $16 billion with $14.5 billion going to Market Facilitation Program payments. Rather than different rates for the various commodities, USDA Undersecretary Bill Northey said farmers will now be paid based on a single county rate. “The team has gone through and looked at the trade damage each county is feeling and we then divide that by the acreage planted within the county and will have a single payment, no matter which of the crops you plant.” This relief strategy is still being reviewed by OMB, but payments will be expedited. “The payments will come out in three different times of the year; we’re looking at a first payment coming out in July or August.” The second payment can be expected in November and the third will come in January. Agriculture Secretary Sonny Perdue said payments will likely be front-loaded, coming out shortly after the Farm Service Agency acreage reporting is wrapped up in mid-July. The first tranche of payments are the only ones guaranteed. The second and third tranches will be made if market and trade conditions are warranted.