Alvin Klassen, president of Dry Bean World, which provides information on dry bean production in Canada and the northern United States, said this year’s drought has cut yields, and already prices are climbing as analysts predict much lower production and supply shortages.
“It is already affecting markets significantly,” Klassen said. “We’re seeing record dry bean prices in North Dakota, or new crop contracts for 2021. And we’re also seeing some very aggressive bids. Over 50 cents a pound in Canadian dollars for old crop beans.
“When you get into the specialty beans, like kidneys and cranberry beans, they’re talking 65 to 70 cents per pound,” Klassen said.
After last season’s record dry bean crop in Western Canada, this year comes as a disappointment as far as yields go. He said the producers who manage to get a good crop off could earn a lot of money for it. Irrigation will play a major role in bean harvest numbers.
“If they’re in a drought region, beans are going to be devastated. There’s going to be no bean harvest,” said Garry Hnatowich research director at Irrigation Crop Diversification Corp. about beans that aren’t irrigated, the research director at Irrigation Crop Diversification Corp.
Even irrigated beans have had challenges. “Under irrigation, well beans are a warm-loving crop so we’ve certainly had the heat but it may be a little too much of a good thing, because what I’m noticing at our dry beans here in Outlook (Sask.) is that the maturity has been advanced. So it didn’t matter how much water we put on the beans, the intensity of the sunlight and the heat was too much for the beans.”
Hnatowich said despite this, crops under irrigation will still produce.“We will have a harvest, there’s no doubt about it, but we could have used five degrees to seven degrees less temperature. That would have been ideal for us. They look good, but I don’t think the yield is going to be as good as what it appears to be.”
Klassen echoed Hnatowich’s statement. “But the drought has made for some very weird shaped pods,” Klassen said. “So we’re seeing a lot of pods that only have one or two beans. And normally, there should be five to seven.”
Klassen said the market prices this year shocked him.“In the 20 years, I’ve been involved in dry bean production, I have not seen prices that high. It’s quite something.”
(Source: The Western Producer)
http://northarvestbean.org/wp-content/uploads/northarvest-bean-logo.png 0 0 Red River Farm Network http://northarvestbean.org/wp-content/uploads/northarvest-bean-logo.png Red River Farm Network2021-08-19 20:36:082021-08-20 20:36:51Canadian Dry Beans in Good Position
Ontario dry bean producers are in a quandary in early January 2021. Their problem is summed up by a message on a sign in front on Ondrejicka’s Elevator near Exeter, Ontario. It says, ‘with IP (Identity Preserved) soybeans at these levels (prices), why would you grow edible beans?’
“It’s a fair question,” says Mike Donnelly-Vanderloo, chairman of Ontario Bean Growers in Thamesford, Ontario. “It’s certainly the one everyone is talking about. I’ve had numerous dealers ask me, ‘what will it take to keep good growers continuing to grow beans?’”
Globally, dry bean consumption has been increasing by 5 percent a year between 2014 and 2019. They’re considered a great source of plant protein and attract a lot of consumers interested in gluten-free and vegan diets. The increasing level of interest in using bean flour by the food processing sector is also a factor.
“They are a high value crop most years,” Donnelly-Vanderloo says. “But they take a lot more effort to grow than soybeans and the input costs are significantly higher. So, there’s no way you would go to all the extra trouble if there isn’t going to be the returns at the end of the road to make it worthwhile.”
Read more in this John Deere article.
http://northarvestbean.org/wp-content/uploads/northarvest-bean-logo.png 0 0 Red River Farm Network http://northarvestbean.org/wp-content/uploads/northarvest-bean-logo.png Red River Farm Network2021-05-18 12:28:022021-05-21 12:29:00Dry Bean Alternative: Beans Can Be Profitable
The Trump Administration has placed tariffs on certain types of aluminum from Canada. This decision comes about a month after the implementation of the U.S.-Mexico-Canada Agreement. Canadian Deputy Prime Minister Chrystia Freeland said the tariffs are “unwarranted and unacceptable.” The Canadian government plans to impose $3.6 billion in retaliatory tariffs against the U.S. Over the next 30 days, the country will determine what U.S. products will face the tariffs. There are no agriculture commodities on the preliminary list. Agricultural interests are monitoring this skirmish for possible trade retaliation.
http://northarvestbean.org/wp-content/uploads/northarvest-bean-logo.png 0 0 Red River Farm Network http://northarvestbean.org/wp-content/uploads/northarvest-bean-logo.png Red River Farm Network2020-08-07 13:57:452020-08-07 17:58:56U.S. Imposes Tariffs, Canada Retaliates

On Wednesday, the Mexico Senate approved the U.S.-Mexico-Canada Agreement by a vote of 114 to 4. Mexico is the first of three countries to ratify the trade deal. Now, all eyes are on Canada and the U.S. to approve the agreement. An implementation bill has been introduced in the Canadian Parliament. Earlier this week, U.S. Trade Representative Robert Lighthizer said Democratic concerns with labor and environmental provisions in the USMCA can “be sorted out quickly.”

A substantial part of the Canadian Prairies remains dry, as near drought conditions linger. Glacier Farm Media Director of Markets and Weather Bruce Burnett says some areas of the western prairies are in their third year of limited moisture. “We had a dry winter with drought conditions last fall in the southern two-thirds of the prairies. We’ve had virtually no soil moisture recharge in the past two years,” says Burnett.

Timely rains are needed to sustain the crop. “To get an average crop this year, we need frequent rains. We haven’t seen that yet this growing season. If we remain dry through June, there will be a lot of stress to crops and the yield potential will drop significantly.” 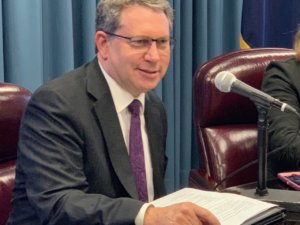 Chief Agricultural Negotiator in the Office of the U.S. Trade Representative Gregg Doud confirmed Tuesday that steel and aluminum tariffs are a big hurdle in the U.S. Mexico Canada Agreement discussions. “I can tell you there’s not a day that goes by at USTR someone isn’t having a conversation with Canada and Mexico to figure out how to sort this out,” says Doud.