The U.S. Dry Bean Council conducted a market scoping trip to Chile in December 2019 to study recent increases in dry bean imports and new opportunities for the U.S. Interviews with the Chilean dry bean industry as well as official production statistics confirm that domestic dry bean production is half of what it was a decade ago and will not recover since farmers shifted from dry beans to other crops that have higher profit margins, particularly fruits and vegetables.

While Chile used to be an important exporter in the region, it now exports fewer than 2,000 MT of domestic beans a year. Chilean importers are interested in establishing direct relationships with US suppliers and learning more about US dry beans – including quality, phytosanitary measures, varieties, and availability.

Domestic demand is around 30,000 MT with Chile producing about half that amount. The top suppliers are currently Argentina (due to proximity and familiarity) and Canada (largely due to relationships that started with the lentil trade). There is greatest potential for Pintos, Great Northern beans, followed by DRKBs (especially for canning or quality packaging), Black beans (depending on Argentina’s supply and price) and possibly small red beans.
In addition to a dozen packaged brands (both manufacturer brands and supermarket private label), prepared foods are an important market segment and there is growing demand for healthy, non-allergenic, organic and plant-based foods. Prepared beans in Tetrapaks and cans take up the same amount of space in supermarkets as packaged beans. We feel there is potential to establish new export streams of U.S. origin dry beans to Chile and will continue to work on this throughout 2020. Full scoping report is available on the USDBC members only webpage.

Bean vendor in the central market in Santiago 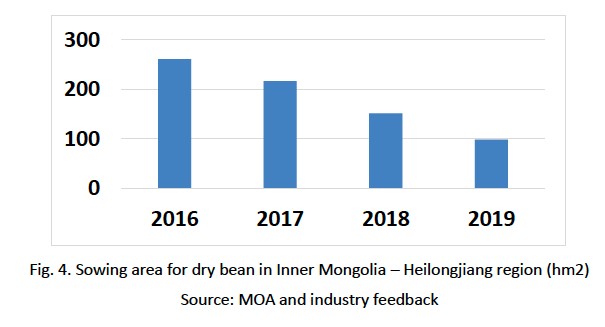 According to the U.S. Dry Bean Council, the first planting and production report from China indicates dry edible bean planting areas in major Chinese production regions continues to decline. China’s total dry bean production is expected to be 166,000 metric tons, a decrease of 23 percent from 2018. Additionally, Chinese exports of dry beans have declined over the past five consecutive years (in value terms), while domestic consumption has kept growing. Exports in 2018 were down almost 25 percent from 2017 at 211,000 MT, and down 66.4 percent from 2013. Read more.