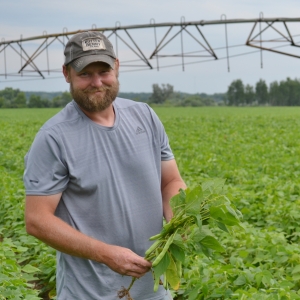 Situated in Lakes Country is New York Mills, Minnesota. The many lakes are filled with boats under the summer sun, surrounded by trees and winding roads as far as the eye can see. The countryside also contains many miles of irrigation pivots, filled with lush soybeans and corn fields that reach over your head. Another common sight are the white blossoms and intertwining vines found in dark red kidney bean fields.

The art of growing dry edible beans, and agriculture in general, has always been in the blood of Cordell Huebsch, a third-generation farmer in the New York Mills area. After graduating from high school, he had plans of going to college at North Dakota State University. However, Cordell made a last-minute decision to put 800 miles between him and the farm to attend Montana State University.

“It was kind of a selfish maneuver, but I didn’t want to come home and work every weekend. I went to college to become a mechanical engineer and really enjoyed my time out west,” says Huebsch. After graduation, the opportunity presented itself for Cordell to come back to the farm in 2003.

Figuring Out What Works

The Huebsch family has been growing dry edible beans since the mid-1970s, along with a variety of other crops. “In the 70s, many farmers were still figuring out how to run center pivot irrigation systems on sandy soils. My dad tried a number of crops, including potatoes, wheat, soybeans, dry beans, corn and alfalfa. After trying it all, he settled on the two or three crops that made financial sense.”

Those crops were corn and beans. For a few years, a portion of the Huebschs’ acres were also dedicated to producing high quality alfalfa for dairy cattle. “It fit well with our crop rotation and did the soil a lot of good. It was profitable for a while, and right now we were wishing we were back in it, but it was a lot of work and eventually turned into a breakeven proposition.”

Cordell goes on to say there were a couple of trailblazers who started growing kidney beans in the sandy soils that surround Perham. Their early adoption of growing the beans brought processing facilities into the area. “Like everything, when there is processing nearby, your cost of production goes down because there is less distance to bring it to market.”

Since then, Perham has been a hub for dark red kidney bean production. “It’s been a stable crop over the years to keep the doors open for our family. As a niche bean, it doesn’t seem to get over produced as easily because of the extra steps needed to grow and harvest it,” says Huebsch. The dark reds also excel in the sandy soils. “They don’t harbor the disease as readily as a heavier soil.”

While a well-drained soil is more expensive to keep wet, it allows the beans to be planted earlier and tended to sooner. “We can have a two-inch rain and sometimes be in the field the next day. A lot of other places that’s not possible,” says Huebsch. That pay dividends, especially during a planting season like this past year. If there was a delay this planting season, it was because Cordell was hesitant to put the beans into the cold ground. “The seeds take off right away when they’re put into warm soil and there are less problems down the road. If Mother Nature holds and it’s a regular to late fall, we’re looking at average to above average yields this year.”

A Leader and an Educator

Huebsch is the newest addition to the Northarvest Bean Growers Association Board of Directors, being selected this past winter to serve. He is a familiar face in another leadership role as president of the Central Minnesota Irrigators Association. “I was approached at one our meetings about the Northarvest board. I thought it was a terrific opportunity and am happy to be on the board.”

As a big proponent for agriculture, one goal he has while serving on the Northarvest board is advocacy outreach. “It’s one thing to tell consumers beans are healthy and that needs to be done. But, we need to do a better job of telling our story as farmers and create a marketable story that can be shared with the public.”

Beyond his board of director duties, Cordell is also in the current Minnesota Agricultural Rural Leadership (MARL) class. “It is important for young farmers to be active and find ways to better the industry. Every new opportunity I take immediately opens up my eyes to how little I actually know about the world,” he explains. “I’m now meeting dry bean growers from all across North Dakota and Minnesota. I knew about growing dark red kidneys in the sand, but I had no idea about the other bean classes and the challenges those farmers face.”

Cordell’s passion for agriculture advocacy can be seen beyond the board room. Along with his wife Kris, they run Otter Berry Farm, which is a u-pick strawberry and raspberry farm. The farm also has a corn maze and sells pumpkins and squash each fall. Being less than a half hour away from Detriot Lakes, there is a lot of tourism traffic in the area.

Living in the heart of Lakes Country provides is an opportunity for the couple to welcome people with non-agricultural backgrounds on their farm. “We can have conversations one-on-one with them about the food we raise and that they eat. When you talk to people personally, it makes all the difference in the world.” The Huebschs also take guests on hay rides in the fall, taking time to show them the crops and explain irrigation.

Cordell says the best part about agriculture is waking up every morning, walking outside and seeing the most beautiful place in the world. “We’re so fortunate to live where we do, and to me that’s just the greatest.”