New research on the feeding habits of the Western bean cutworm has found that careful consideration of pest control is needed when growing dry beans next to corn to prevent resistance development to insecticides and toxins.

Normally, refuge crops are planted so that pests such as the Western bean cutworm, which is actually a moth, that manage to survive toxins or insecticides on corn or beans, may mate with moths that were not exposed to them. This results in a new generation of weaker moths that are less resistant to insecticides. Dry beans are sometimes grown near corn fields because of soil nutrient requirements, and Illinois Institute of Technology Ph.D. candidate Dakota Bunn wanted to see if these crops were an effective co-refuge for each other.

Bunn examined how the populations of the moths that fed on beans as larvae were interacting with the moths that fed on corn as larvae. He and his colleagues captured more than 3,200 moths over two summers in central Michigan, froze them, and then conducted a stable carbon isotope analysis on their wings and heads, which revealed whether the adult moths fed on corn or beans in the larval state.

In a paper published earlier this year, Bunn says that the results “demonstrate that beans and corn cannot be used as mutual refuge in insect resistance management (IRM) in central Michigan, and that further research is needed to determine proper IRM for areas where corn and dry beans are grown in close proximity.”

The findings underscore the need to continue to closely monitor the cutworm’s resistance to the control methods used for corn.

Western bean cutworms can cause significant damage to corn crops, affecting both the overall yield and quality. The moths are native to the western plains but have expanded their territory eastward and are now in 25 states and four Canadian provinces.

The research was published in the February 2021 issue of Environmental Entomology, in a paper titled “Contribution of Larvae Developing on Corn and Dry Beans to the Adult Population of Western Bean Cutworm in Michigan.” 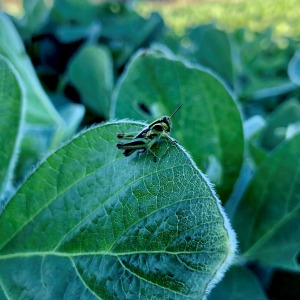